Nothing makes an impact like a good story. So, when Alabama writer Joe Hilley wanted to focus attention on the international sex trade, he turned to fiction.

"Fiction does more than entertain. It places information within a context. Not just any context, but one developed by the reader's own imagination. The reader actually becomes part of the story." Having the reader participate in the story was important for Hilley.

"Each year, thousands of women around the world are kidnapped and forced to work in the sex industry. Many of them end up right here in the United States where they are sold and traded like slaves. This stuff doesn't happen in a vacuum. It happens in someone's neighborhood. As long as it’s just an ‘issue,’ then it’s just words on a page. To make a difference you have to own it. You have to know, ‘this could happen right here.’ That’s what a story does. It helps you experience an issue in a personal context."

Beaten and drugged into submission, women primarily from Asia and Eastern Europe are sold and traded from country to country. According to conservative estimates, 15,000 of those women are smuggled into the United States each year where they are forced to engage in prostitution and pornography.

Think it can't happen where you live? Read Electric Beach and think again.

Set along the Gulf Coast and ripped from the latest headlines, Electric Beach, the new legal thriller from attorney-turned-author Joe Hilley, takes you beneath the congenial veneer of everyday life to a world of prostitution, pornography, and sexual slavery - and it's happening in places you'd never expect.

Electric Beach was released in May (2006). You can read a sample chapter now at www.joehilley.com

See Joe's videos at http://www.youtube.com/profile?user=JoeHilley
Posted by Joe at 2:16 PM No comments: 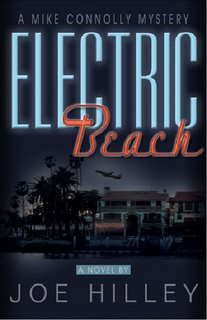