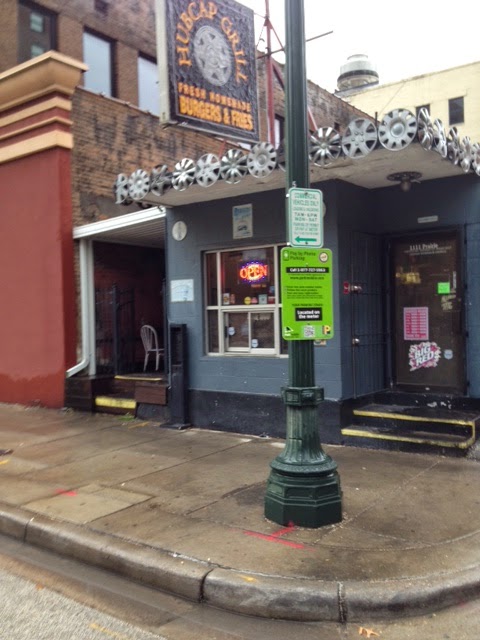 Our second stop on the Burger Tour of Houston took us to Hubcap Grill. They have several locations around the city but we visited the original site, located at 1111 Prairie Street, downtown. This is another of the hamburger joints in the "store-turned-cafe" genre and as you can see from the photo below, the interior is quaint but cramped. (They have outdoor seating on one side). 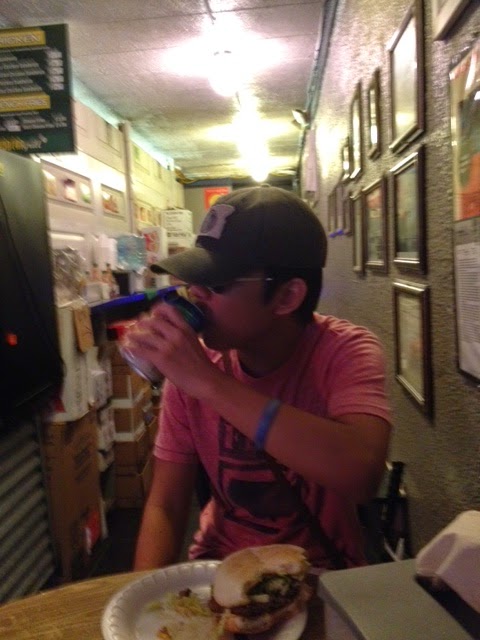 The hamburger I had that day was hand-patted - which is the first step beyond the "machine burger" served by fast food restaurants - but beyond that I found it . . . unremarkable. Good, but not outstanding and lacking a noticeable  "wow" factor. You can see part of one on Jack's plate in the photo above. He gave it his typical, "better than McDonalds" rating. I gave it the, "Okay, but let's try another place" response.

Hubcap Grill is a favorite for many Houstonians and has a strong reputation. If I were already downtown for another reason and wanted a hamburger, I would go there. But for a special trip, I would go somewhere else.

The thing that did catch my interest and would take me back there on a special trip was the story of the original owners - Italian immigrants who came to America in the early twentieth century and opened the location as a store. Photos of the couple hang on the walls and the current owners were more than willing to talk about the history of the place. And though I might not drive down there solely for the burger, I would return especially to hear more of the founders' story and this time to take notes. 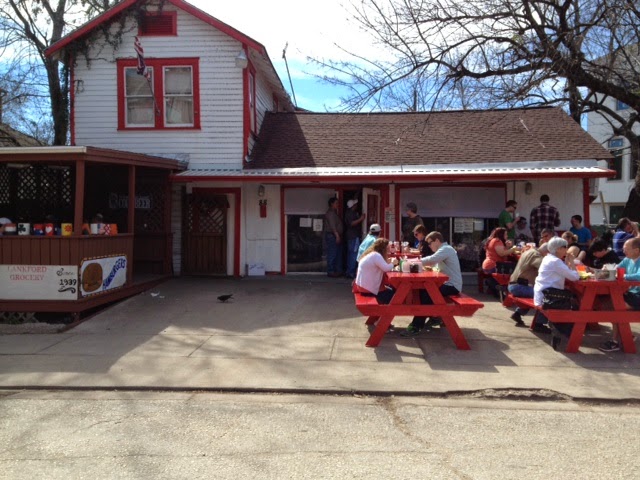 Our first stop on the Burger Tour of Houston was at Lankford Grocery & Market - part of the Texas grocery-store-turned-cafe restaurant sub-genre. All the Houston food web sites and eatery referral places rave about this place so we began our quest for the definitive burger here. Our first experience rated an "okay" from me. Jack gave it his usual "better than McDonalds" but really, I was underwhelmed. The burger was big, which is good, and loaded with whatever toppings we requested, also good, but I thought the flavor of the meat was flat - it didn't appear to be hand-patted - and lost in the add-ons.

This place is known far and wide and the general public talks about it all the time so we went back for a second taste after visiting several other eateries. This time I ordered my burger plain - meat and bread. Jack still gave it a "better than McDonalds" rating and I still found the meat lacking, but the atmosphere was better and the place had that "grows on you" feel.

The story of the business is rather interesting - family owned for multiple generations, began as a grocery store now just a restaurant. Still operated by a Lankford. An in-law was manning the cash register on our most recent stop, which I suppose said something about their trust in him. It also told me the owners placed greater emphasis on the food and service than on the money, which goes a long way toward explaining why this place is always packed. They serve many other dishes besides hamburgers, including breakfast, which we intend to try, but that's for another tour.

The picture below shows the interior. 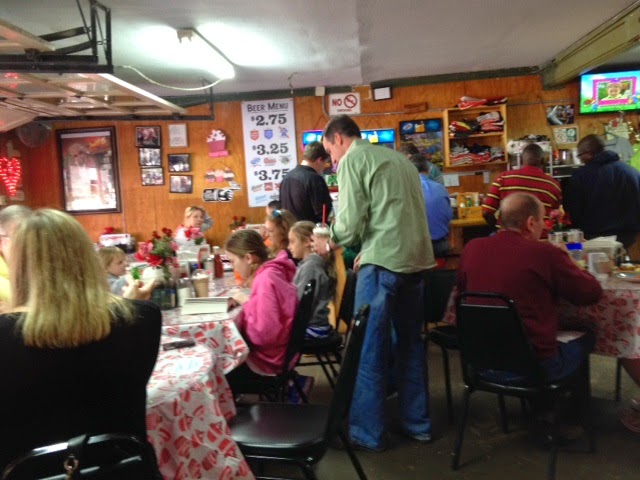 Lankford Grocery & Market is located at 88 Dennis Street in the Montrose section of Houston
Posted by Joe at 6:00 AM 1 comment:

The picture above is a shot of Callaghan's Irish Social Club - a bar on Charleston Street in Mobile, Alabama, and home of the best hamburger on the Gulf Coast. From Corpus Christi to Apalachicola, you can't find a place that beats the taste of their burger. Jack and I have eaten there many times and when we're in Mobile we do our best to go there for lunch.

Since moving to Houston we've tried to find a burger joint with a comparable taste and similar ambiance. We've been aided in our effort by Jack's gift of "Burger Bucks" - money he gave me last Christmas to help cover the cost of a burger tasting tour of Houston. Two men with an appetite and cash, in an '85 Mercedes with a broken air conditioner - we've sweated our way through some interesting experiences.

Over the next few weeks, I'll show you pictures of the places we've visited so far and catch you up on or assessment of the flavor.

This is a picture of the Grand Bay Elementary School For Colored. It was constructed with help from the Rosenwald Fund and used to educate African-American children in the 1920s. The site is along U.S. Highway 90, east of Grand Bay, Alabama. Classes for grades one through six were conducted there until the 1940s when the school was consolidated with the school at Dixon Corner (photo from Fisk University). 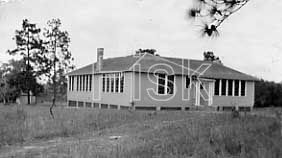 Last night, Daryl Hall was inducted into the Rock and Roll Hall of Fame (along with John Oates of the combo Hall and Oates). So, continuing with the Daryl Hall - Live From Daryl's House emphasis, this is Daryl singing Crazy with Cee Lo Green.

Most of you have probably already seen Daryl Hall's show Live From Daryl's House. This is Daryl singing with Todd Rundgren from an episode several years ago. I think the versions they do on this show are better than the originals.

Can We Still Be Friends
Posted by Joe at 4:43 AM No comments:

Last fall, George and Barbara Bush attended the wedding of two friends in Maine. The friends were two women who were marrying each other. This is old news, but I refer to it now to say that same-sex marriage, like many other so-called polarizing issues, is easy to discuss in polemical terms in the abstract - “we ought to do this” or “we ought to do that.” But the issues become something else when the people involved are our friends.

I don’t know about you but when issues like this touch the lives of my friends they also touch my life as well - in a personal way - and my reaction to the critics who attack my friends is usually something like, “kiss my ass.” I think George and Barbara would give a more polite “none of your damn business” response, but the point is still the same - political issues divide us in the abstract, which is where politicians want to keep them so they can use those issues to manipulate us. But our personal reaction to those issues, when we encounter them through our own lives or the lives of our friends and family, tells us more about where the country is headed and how those issues will finally be resolved.
Posted by Joe at 6:21 AM No comments: 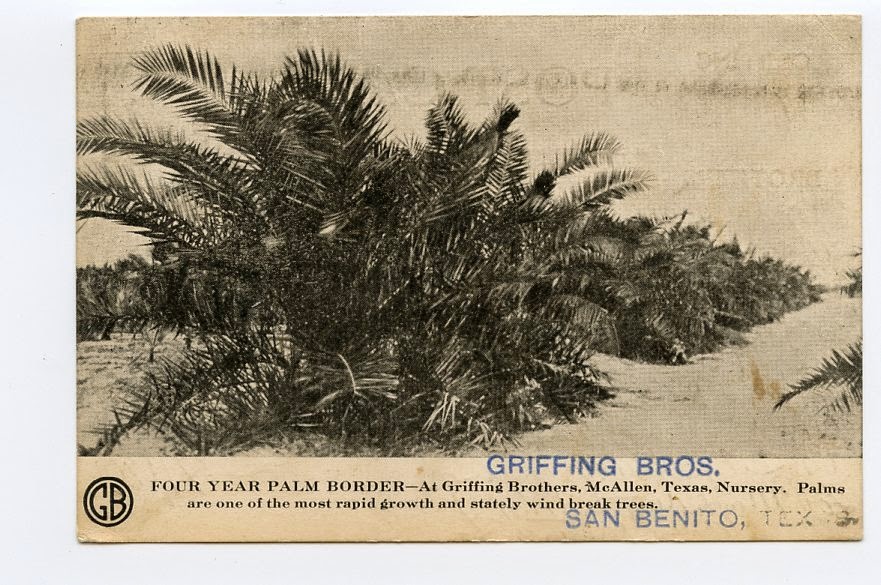 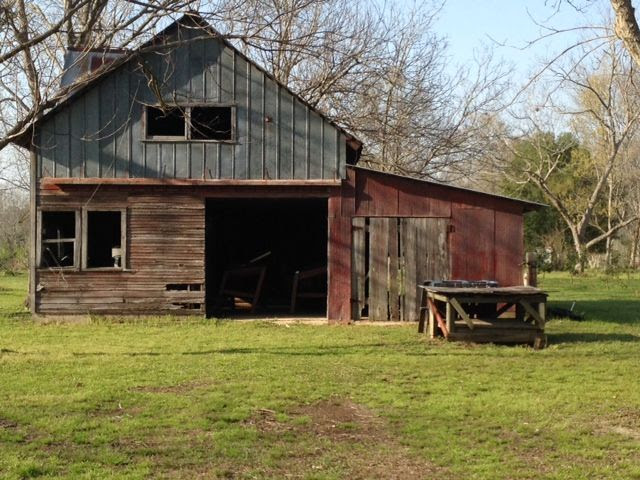 A barn in Grand Bay Alabama
Posted by Joe at 5:50 AM No comments:

Governor Christie and the Highway Flap

As I continue to read about the controversy involving New Jersey governor Chris Christie and lane closures from Fort Lee onto the George Washington Bridge, I have become suspicious that this is an attack on Christie from the Republican right, rather than a substantive legal problem or a challenge from the left.

Many conservative Republicans were upset with Christie's comments following Hurricane Sandy, his cooperative stance with the Obama administration during hurricane recovery, and his refusal to use the catastrophe to score cheap political points with the far right. I think this continuing brew-ha-ha is more about political payback and the internal war within the Republican Party and much less about anything else - which would be an interesting twist - Christie operatives try to squeeze the Fort Lee mayor for not endorsing Christie, only to get squeezed themselves as operatives from the far right kick the story from one news cycle to the next.
Posted by Joe at 9:02 AM No comments: