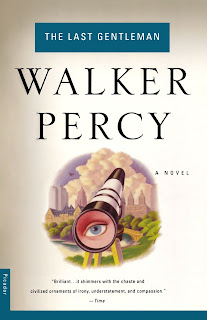 The Last Gentleman, a novel by Walker Percy, was published in 1966. I finished reading it the other night.
This was Percy's second book and it doesn't appear to have gained the following of his first, The Moviegoer (see below). Also unlike Moviegoer, this book hasn't been critiqued as deeply for its philosophical assumptions and implications.
The Last Gentleman follows the life of Will Barrett, a young Southerner who relocates to New York in search of an authentic sense of himself and a life of purpose and meaning (common themes for Percy). Barrett, it seems, suffers from something identified only as a "nervous condition" marked by recurring fugues - episodes of disassociation from himself - and from periods of intense deja vu.
Through a series of circumstances, Barrett becomes acquainted with the Vaughts, a Southern family, apparently from Alabama, who have come to New York seeking medical treatment for their son, Jamie. The Vaughts like Barrett and in talking to him learn that they have many acquaintances in common.
When the time comes for the Vaughts to return home, they insist that Barrett return with them to help care for Jamie and serve as his companion. By then, Barrett is in love with Kitty, the Vaughts' daughter. He agrees to return with them to their home in the South where he looks after Jamie and romances Kitty.
That is the basic plot of the book, but in telling that story Percy also tells us the story of Barrett's life before he came to New York and his family's history and position in Southern society. And quite a lot about the Vaught family's story as well. Most of the book follows a continuous narrative, but not all of it and Percy slips seamlessly into discontinuous time - telling the reader things that happened earlier but without being as obvious about it as a reader today might expect from a popular novel of the current era.
This novel probably won't be my favorite Percy story. I enjoyed reading it and I thought Percy had a reason for writing it - something he wanted to tell us or something he wanted us to think about, he just never seemed to get to it. Obscurity, as someone pointed out about one of my own books, is a good thing, but too much of it makes a story unworkable. I would say something like that about this book.
Posted by Joe at 1:40 PM No comments: