The City of Houston replaced the waterlines in our neighborhood. This is from the final work on our street.

View from the porch at Junk Gypsy Antiques, Round Top, Texas

The view from a window at Teague's Tavern, Round Top, Texas.
Posted by Joe at 11:06 AM No comments:

UNEDITED FOOTAGE OF A TRACK HOE

One house leaving - another house coming 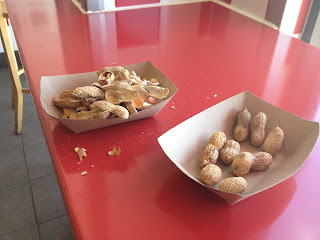 Five Guys - not sure which I enjoy most - the hamburgers or the peanuts
Posted by Joe at 8:47 AM No comments: 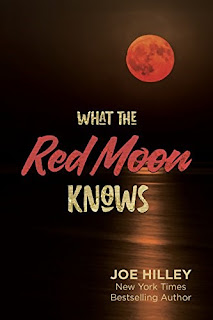 Set along the Gulf Coast, What The Red Moon Knows tells the story of Ruth Ecklund—seventy-something and enjoying a settled life—until the day she sees a man standing next to a yellow Cadillac. And suddenly, her world turns upside down.

She knows him—she thinks—but it can't possibly be true...can it?

Is the man beside the yellow Cadillac really Elvis—with whom she had a brief romantic encounter as a teen? Or is he Bobby Wayne Pugh, an Elvis impersonator on the run from Las Vegas hit men?

The Red Moon knows the answer but to find it Ruth must survive a madcap jaunt across Florida, an unsettling journey into the memories of her past, and a wild ride into the imagination of the stranger with the yellow Cadillac.

What The Red Moon Knows—the latest novel from Joe Hilley—available now from Dunlavy + Gray in paperback and as an eBook.
Posted by Joe at 9:40 AM No comments:

UNEDITED FOOTAGE OF ICE MELTING ON A WINDSHIELD

Winter in Houston, Texas
Posted by Joe at 6:31 AM No comments:

Proverbs 16:10 says, "The lips of a king speak as an oracle, and his mouth should not betray justice." (NIV)

That verse doesn't say the king IS an oracle or that the words he utters always are true or infallible. It says he speaks AS an oracle—with the force and authority of an oracle, but it goes on to say that because of this, the king's mouth should not betray justice.

In saying that the king's mouth 'should not' betray justice, the verse presupposes that even though his speech carries authority, the king still has the capacity to say things that are wrong, untrue, or contrary to the duties and responsibilities of his office.

Rulers occupy a special place, a special office. That office gives them positional authority and power—authority and power derived solely from the office they hold. Because of that, they must control their tongue, self-edit their extemporaneous comments, and guard the language of their formal statements, lest they betray the moral imperative of their office and incur judgement because of it, rather than blessing.
Posted by Joe at 8:10 AM No comments: