OTHER VOICES, OTHER ROOMS - TRUMAN CAPOTE 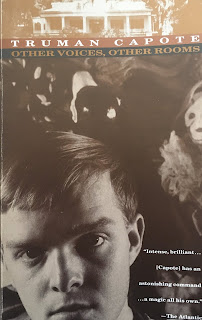 I recently finished reading Other Voices, Other Rooms - the Truman Capote novel noted pictured above. This was Truman Capote's first novel. Prior to this book, Capote had written for a number of literary magazines which made him a notable figure in those circles. This novel brought him to the attention of a national audience. The book was well received, widely acclaimed, and launched his career as one of the best-known writers of the twentieth century.
Capote was born in New Orleans but his parents were from Alabama and he spent much of his childhood with relatives in Monroeville. Other Voices, Other Rooms draws on many of his experiences there.
The book was an interesting read but a little strange at places. And the ending lost me at first, then I went back and re-read the last two chapters and figured it out. One or two of the people in the book seem not to have existed except to those living at Skully's Landing. When asked about it, Capote said he thought so, too. Which is an interesting response from the person who wrote the book. And that's what reading it was like for me, also.
Posted by Joe at 12:13 PM